All is quiet except for birdsong as my kayak glides silently over the glassy jade water. Lush ferns and figs drip from vertical limestone cliffs that plunge into the sea, corralling me inside the watery grotto of the enclosed tidal lake accessed via Luon Cave, a low, eroded archway in the rocks – so low it requires hunching over at high tide.
Legend has it the limestone karsts of Halong Bay, in Northeast Vietnam, were formed from emeralds dropped by dragons to ward off seafaring invaders.
Halong translates as ‘Place of Descending Dragon’ and while the rock pillars may have deterred ancient attackers, they are a drawcard for tourists, especially since granted UNESCO World Heritage status in 1994.
The proximity of the 1600-plus islands and islets to Halong City makes them easily accessible for day trips and overnight cruises.

The profusion of boats simultaneously surging out of the harbour each day is a sight to behold, jostling for position as they weave between gritty cargo barges and toy-sized wooden junks.
I’m travelling aboard the newly built Paradise Elegance, a modern vessel with old-world character – think nautical white exterior and elegant, dark timber interior. With 31 cabins, it’s the largest of the Paradise fleet, yet has an intimate feel with excellent service.
All cabins have a balcony, a hotel-worthy bathroom and a dressing room porthole so you never miss a view. Within two hours of departing the base on Tu`ân Châu Island we’re at Sung Sot Cave, the largest in the area.
Ferried ashore, we climb for views over the bay before descending into the cave.

The one-way route traverses cathedral-style caverns, past theatrically lit stalactites and stalagmites in dramatic sculptural shapes, ranging from an erect phallus revered as a fertility symbol to a humble tortoise, a pseudo shrine symbolising longevity.
Titov Island, named after Soviet cosmonaut Gherman Titov who visited in 1962, protrudes from the water like a conical Vietnamese hat. A sweaty climb up the steps to the top is worth it for the panoramic vista of craggy islands that resemble the spines of dragons.
The pocket-sized beach at the base, while crowded, provides a welcome swim to cool off. Back onboard, it’s cocktail hour as the sun silhouettes the dramatic karst landscape against an orange sky.
I forgo the cooking demonstration in favour of a pre-dinner salt scrub in the spa. Dinner is an elegant affair, followed by entertainment in the lounge bar, courtesy of a local duo on piano and vocals. Reminiscent of a gentleman’s club, it’s a cosy spot to linger, although most guests retire early. Throwing open the door of my cabin to catch the evening breeze, myriad cruise boats resemble giant floating glow worms twinkling in the inky blackness.
We welcome the morning with tai chi on deck before breakfast while cruising towards Luon Cave. Motors are banned within the cave so passengers transfer to local bamboo boats they can paddle themselves or have manoeuvred by an oarsman.
I opt for kayaking, allowing me to get close to a monkey fossicking at the waters’ edge, and to drift silently in the grotto as shards of sunlight illuminate schools of tiny fish. It’s peaceful and free of the floating debris that’s a consequence of the area’s popularity. (I’m pleased to learn Paradise Cruises participates in the annual Halong Bay Clean-Up Day, with staff donating their time to pick up rubbish.)
Back aboard Paradise Elegance it’s time to return to port. Although called a two-day, one-night cruise, it’s a little shy of 24 hours and, while offering a scenic slice of this watery wonderland, it leaves me longing for more. We were to have experienced the new three-day, two-night cruise, which ventures further afield, but due to an impending typhoon the port authority cancelled all cruises. Hoping to escape the tendrils of the typhoon we head south to Central Vietnam but, as we arrive at Lăng Cô, an hour’s drive from Da Nang International Airport, it’s raining.
Despite the drizzle, there’s plenty to do at Laguna Lăng Cô, an ‘integrated resort’ covering 280 ha fronting a 3-km crescent of beach. It includes two hotels, the contemporary, yet family-friendly Angsana, and the luxurious Banyan Tree, along with a championship golf course.
Freshly rinsed frangipani and gardenias fragrance the air in the lush gardens, but rain puts a dampener on swimming in my Angsana balcony plunge pool and floating along the 300 m swimming pool that swirls snake-like through the resort. So I don a raincoat and head to the beach for some high-octane action. Against a brooding black sky we head off on ATVs (all-terrain vehicles, a.k.a quad bikes).
Veering into the forest we bounce over rutted tracks and swerve between trees. I can’t stop laughing as we power through puddles, water exploding beneath our wheels. My Yamaha is nicknamed Grizzly, so I give it some grunt, blatting back along the beach at 40 km/h.
Laguna Lăng Cô is centrally located between the UNESCO World Heritage cities of Huê’ and Hôi An and I take advantage of the resort’s tours to both.
Capital of the Nguyen dynasty from 1802 until 1945, Huê’ (pronounced ‘Hway’) lies on the banks of the Perfume River. The Citadel, begun in 1804, is a walled city-within-the-city, covering 520 ha. Surrounded by a moat, the 10 km crenellated outer wall protects two inner walled sanctuaries: the Imperial Enclosure, once home to the affairs of State; and the innermost Forbidden Purple City, the personal domain of the Emperor.
Though severely damaged during the French and American wars, what remains is a labyrinth of crumbling walls and decorated archways that beckon, evocatively, to be explored.
Further along the river is Thiên Mu Pagoda (Pagoda of the Heavenly Lady) marked by a seven-storey octagonal tower dedicated to Buddha, the unofficial symbol of the city. Here, monks chant in the inner temple as tiny skinks scale the walls. Far more elaborate is the tomb of Khai Ði.nh, the penultimate emperor who reigned from 1885 to 1925.
A solemn honour guard of monochrome Mandarin figures outside contrasts starkly with the garishly lit, confetti explosion of coloured mosaics within.
Planned by the emperor himself, it took 11 years to build – two years longer than his reign. In Hôi An we wander the narrow car-free streets of the Old Quarter in plastic ponchos as raindrops transform the Thu B`ôn River into a dimpled canvas.
A major international trading port during the 16th and 17th centuries, the town features Chinese, Japanese, Dutch, Portuguese and French influences. The ornamented Japanese Covered Bridge, spanning a small canal, dates back to the 1590s and there are numerous elaborately decorated Chinese assembly halls where hanging incense cones burn for up to three weeks.
But it’s the shophouses I love, where weeds sprout from crumbling facades, vividly painted doors contrast against aging stonework, and unruly bougainvillea tumbles over sagging awnings.
Lantern-making is prolific here and the lustrous silk, hand-painted designs are everywhere; suspended above the streets, swinging from trees and adorning shops and restaurants.
The continuing rain has rinsed the colourful scene of dirt and dust, but rain, hail or shine, Hôi An’s beauty and time-honoured elegance shines through. 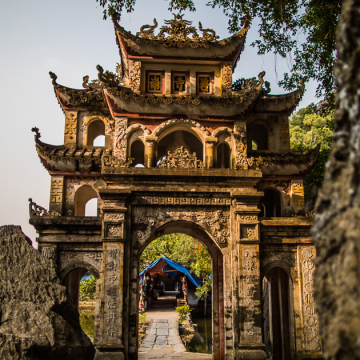 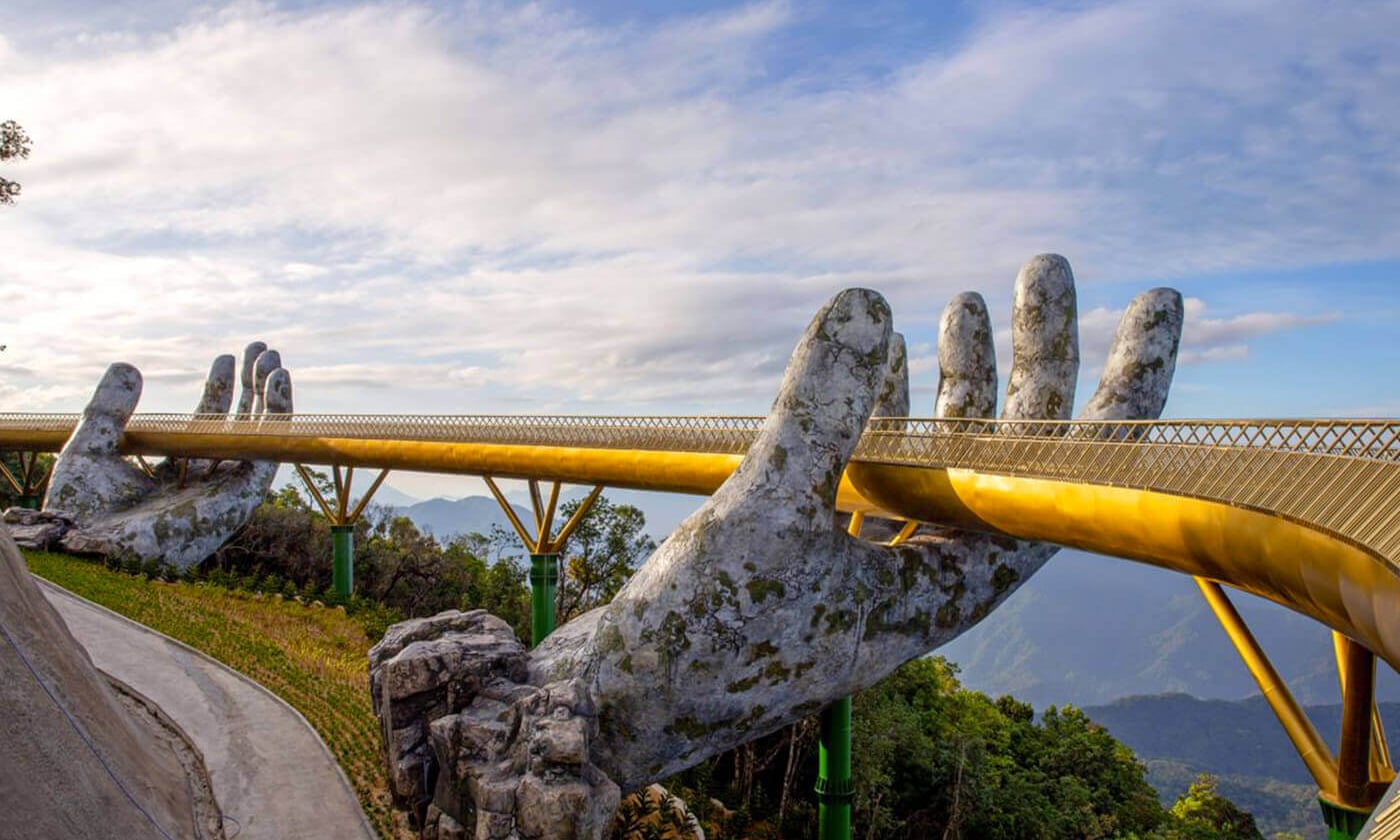